An exhibition of hand-crafted art and design pieces, including a seminal sculpture by Charles and Ray Eames, is on display at the former New Jersey home of 20th-century landscape architect James Rose.

At the Rose House is on show at the Ridgewood home that the late American modernist landscape architect designed and hand-built for himself and his family in 1953 and lived in for almost 40 years.

The show “emphasises the hand-made, beauty in nature and a sense of timelessness” according to the curators.

Green River Project LLC founders Aaron Aujla and Benjamin Bloomstein, who have admired the landscape architect for some time, have produced a series of new designs based on his work.

Created in collaboration with a group of designers, these pieces include a side chair by both Bloomstein Industrial and Luck Carpentry, rice paper lamps from Preziosi Lighting and carved grooming items on shelves in the bathroom by Teague’s Path.

“The ease in which Rose expanded the home using ready-made materials was an early point of reference for our practice,” said Aujla.

“In particular, there is a kitchen with mahogany shelves and pegboard that we must have spent over 100 hours dissecting and referring back to over the last five years.”

The works are installed as if they belong in the rooms and garden, which – like many of Rose’s later projects – feature elements of Japanese design, including the exposed timber structure and shoji screens.

“[Rose] spent considerable amounts of time in Japan and became a Zen Buddhist,” said the curators. “This influence is evident in the Ridgewood house, especially on the upper floor, which contains a room for his daily mediation practice that The James Rose Center is currently restoring.”

Pieces on display include the Eames’ seminal 1943 Plywood Sculpture – the first time that this edition, which was made and released by Eames Office, is being presented in the US.

Among the designs created for the showcase are leather Adirondack chairs by Hugh Hayden, wood-fired micaceous pots by Johnny Ortiz-Concha and naturally-dyed framed textile works by Kiva Motnyk. 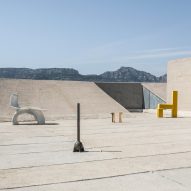 A selection of clothing by New York brand Bode, based on Rose’s “eccentric” personal style, is hung in the closets throughout the house.

Green River Project LLC is also producing new editions of one of Rose’s lanterns to coincide with this exhibition.

These will be sold to benefit The James Rose Center – a non-profit landscape research and study foundation, which is based at the house and has preserved Rose’s legacy since his death in 1991.

“Rose was an impossible maverick, called by one author, ‘The James Dean of Landscape Architecture,’ but I think he would be very happy with the vision Green River Project LLC and Object & Thing have brought to his house,” said foundation director Dean Cardasis.

At the Rose House runs until 2 October 2022. This is the latest in a series of exhibitions organised by Object & Thing within the homes of notable 20th-century artists and architects, following presentations at the houses of Gerald Luss, Robert Dash and Eliot Noyes.

Other exhibitions that showcase the work of modernist designers include an exhibition of Le Corbusier’s tapestries in Manhattan.

See our Dezeen Events Guide for information about other exhibitions, installations and talks.