Chinese architecture studio MAD has revealed photos of its sculptural Cloud Center building in Qinhuangdao, China, which was designed for arts and culture community Aranya.

Images of its construction show the 2,500-square-metre building’s bulbous shape taking form, as well as the beginning of the process to clad its overhanging roof in white-stained glass.

The cultural center, which will be located in the port city of Qinhuangdao, 160 miles east of Beijing, will house a grand hall, a gallery and a small theatre.

Its design was informed by the “shape and lightweight appearance of clouds” and will sit in the middle of a landscape conceived by MAD as a “white stone garden.”

The studio designed the Cloud Center’s roof to be suspended from a central core, with the main and secondary truss suspensions welded to its steel structure to create an almost column-free interior.

White glass-cladding was chosen to reflect the surrounding environment, which was also designed by MAD and includes a pond and a garden. 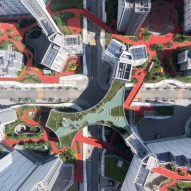 “When visitors walk from the windy road to the main entrance of the Cloud Center, they are met with a large pond that reflects the underbelly of the white structure, as though it was just like the many clouds in the sky above it, to produce a stunning multiplication of reflective surfaces,” explained MAD founder Ma Yansong.

Floor-to-ceiling glass walls will connect the building’s roof with the ground and were chosen to create a “floating” effect, according to the studio.

Most of the Cloud Center’s footprint will be taken up by the grand hall, which can be subdivided into smaller spaces to be used for performances or conferences by configuring a number of non-load-bearing walls.

The site will also hold an ancillary cafe and feature tapering walls that gradually increase in height and protect the area from winds.

The Cloud Center is expected to be completed in 2023.

Other recently completed projects by MAD Architects include its first social housing project and an amorphous concrete library in China.

The main image is by Zhu Yumeng.